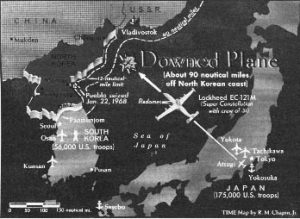 1969: North Korean MiGs shoot down a US Navy EC-121 reconnaissance aircraft with 31 crewmen during its routine mission some 100 miles off the North Korean coast. Within seven minutes, Osan-based F-106s are in the air on combat air patrol, and in 30 minutes USAF launches an HC-130 search aircraft from Tachikawa. On 20 April USAF ends the search and res­cue effort, finding no survivors.