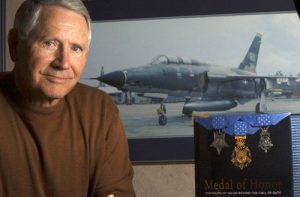 1967:   MEDAL OF HONOR. Maj Leo K. Thorsness receives his medal by protecting a mission to rescue downed airmen in North Vietnam. Flying an F-105, he shoots down one MiG-17, damages another, and drives off three more. Enemy forces, however, shoot him down, capture him, and hold him as a prisoner of war until 4 March 1973.