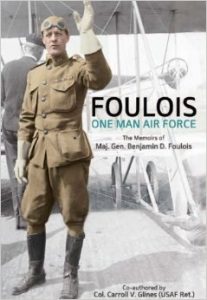 1967:    Maj Gen Benjamin D. Foulois dies at Andrews AFB at the age of 87. He was the first person to fly an Army dirigible; first military observer on a cross-country flight, with Orville Wright; first military man to teach himself to fly; one of two Americans to first use a plane in combat; and the first Chief of Staff of the Army Air Corps to be a military aviator.