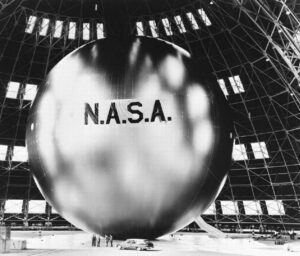 1962:    ECHO I satellite launches from the Air Force Cape Canaveral launch Complex 17 aboard a Thor-Delta rocket. After two years in orbit, the Echo I satellite establishes that inflatable structures could function in space for long periods. In its 9,000 orbits, the aluminized mylar plastic balloon covered 277,257,677.67 miles while supporting some 150 communications experiments. Designed originally for a three-four year life span. it burns up entering the Earth’s atmosphere on May 24, 1968.