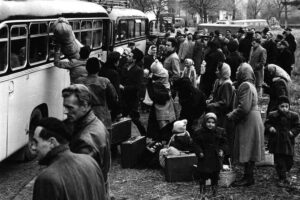 1956:    Operation SAFE HAVEN. After a revolt against Soviet rule in Hungary expelled Russian occupation forces, the Soviets send in reinforcements to restore order. But before the Soviet-backed Hungarian government close the borders, some 200,000 refugees flee. MATS, Navy, and commercial aircraft fly 15,570 refugees from Europe to the US thru 30 Jun 57.