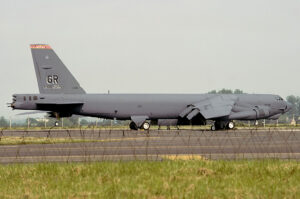 1992:    MACKAY TROPHY. At night, a B-52 from the 668th Bomb Squadron (Griffiss AFB) loses two engines when one explodes and damages another. Two other engines on the same side of the air­craft flame out. The pilot manages to restart the two flamed-out engines and land the plane safely. For that feat, the crew receives the trophy.