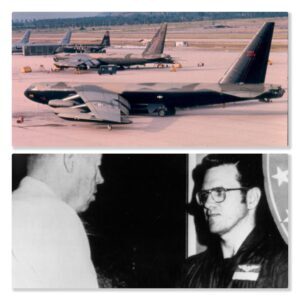 1972: Operation LINEBACKER II: President Nixon orders this 11-day all-out bombing campaign against targets in Hanoi and Haiphong, one of the most heavily defended areas of the world. Altogether, the USAF completes 714 B-52 and 830 tactical fighter sorties, and KC-135s fly more than 1,300 refueling sorties. North Vietnam manages to shoot down 15 B-52, 2 F-4, 2 F-111, and various other aircraft in this operation. During his Linebacker II mission, SSgt Samuel O. Turner becomes the first B-52 tail gunner to shoot down an enemy airplane, a MiG-21. He receives the Silver Star.