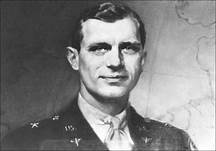 1944: MEDAL OF HONOR. BG Frederick W. Castle leads some 2,000 heavy bombers against German airfields. On the way an engine fails, and his unescorted B-17 becomes a target to enemy fighters. After his bomber sustains serious damage he orders the crew to bail out while he remained at the controls. Another enemy attack caused the right-wing gas tanks to ex­plode, and the bomber crashes with the General still inside. For this sacrifice, Castle received the Medal of Honor.