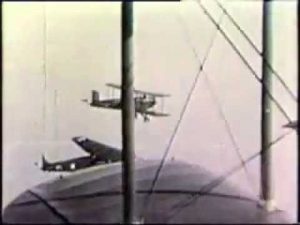 1929: THE QUESTION MARK. Through 7 January, to test inflight refueling and crew and aircraft endurance, Maj Carl A. Spaatz and crew fly the Question Mark, a modified Fokker C2-3 with a Wright 220 HP engine, to a world duration record of 150 hours and 40 minutes. Flying between Santa Monica and San Diego in California, the tankers refueled the Question Mark 43 times, allowing it to remain aloft until engine problems forced a landing. All officers on the Question Mark–Carl Spaatz, Ira Eaker, Harry Halverson, and Pete Quesada–became generals, as did two officers on the refueling aircraft: Ross G. Hoyt and Joseph G. Hopkins. The crewmembers of the Question Mark were each awarded the Distinguished Flying Cross for the mission.