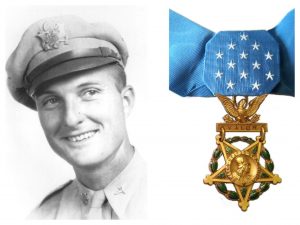 1944: MEDAL OF HONOR. While leading a B-24 group against enemy coastal positions, Lt Col Leon R. Vance’s bomber sustains repeated hits from antiaircraft fire, perilously crippling the bomber, killing the pilot, and wounding other crewmen, including Vance. Despite his injury and three lost engines, Vance still leads the formation over the target and bombs it successfully. Returning to England, he gradually loses altitude, and he orders the crew to bail out. One man, however, was badly injured, so Vance ditches his B-24 in the channel. After landing on water, the plane starts to sink with Vance pinned inside. An explosion occurs and throws Vance clear of the wreckage. After resting, he searches for the other crewman. A search and rescue craft finds Vance 50 minutes later. For his courage and valor he receives the Medal of Honor.