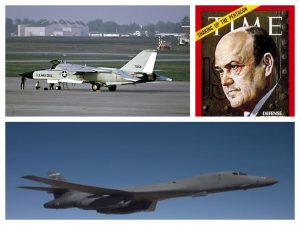 1969:    SECDEF Melvin Laird announced that the FB-111 program would be reduced, due to its lack of intercontinental range. He thus limited the USAF to four squadrons with 60 aircraft and a few replacements. Laird revealed that a new bomber, the Advanced Manned Strategic Aircraft (AMSA) would be developed. This aircraft later became the B-1.