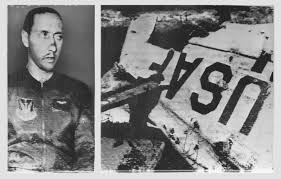 1965: North Vietnam shoots down Lt Hayden J. Lockhart’s F-100 during his raid against an ammo dump north of the demilitarized zone. A week later, he becomes the first USAF pilot taken as a prisoner of war. He is not released until 12 February 1973. #afhistory #airforce #spaceforce #airmen #guardians