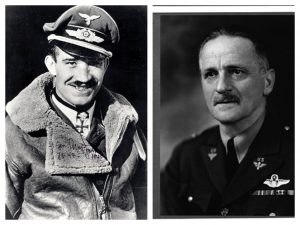 1945:   Gen Carl Spaatz sends Eighth Air Force against Berlin to destroy the Luftwaffe. Spaatz realizes the enemy would defend Berlin, so he sends bombers over the city with P-51 Mustang escorts. General Galland of the Luftwaffe later said, “Whenever our fighters appeared, the Americans hurled themselves at them. Nowhere were we safe from them.”