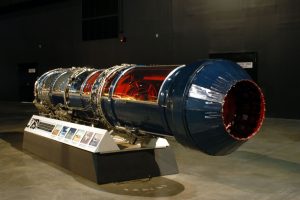 1944: General Electric’s XJ79 turbojet engine makes its first flight in the NB-45 test aircraft over Sche­nectady, N.Y. This engine later develops and is tested in December 1955, becoming the J79. This engine will subsequently power the Convair B-58, the Lockheed F-104, and the McDonnell Douglas F-4.