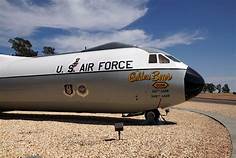 2005: Travis AFB places the restored C-141A Starlifter (tail number 63-8088) nicknamed the Golden Bear on permanent static display. It was the USAF’s first operational C-141A, the first to carry wounded troops from Vietnam to the US, the first to fly into Saigon, and in 1973 it helped fly the 566 military and 25 civilian former prisoners of war from North Vietnam to the US.